Last month, I had the honour of speaking at the Cruelty Free Festival in Sydney. I titled my presentation ‘Myth-Busting the Vegan Diet’, and boy, are there a lot of myths to bust.

This is actually one of the most contentious areas of nutrition, even in the plant-based nutrition world. The Internet is awash with misinformation regarding fat, and a slew of popular pro-fat books released over the last several years has only contributed to people’s confusion about how much fat they should eat, and what type is best.

I’ve been asked so many questions about fat both by clients and members of EmpowerEd, my health and nutrition education program, that I thought I’d gather all the Big Fat Myths together into one post.

Here they are, in no particular order:

I’ve covered coconut oil in detail in my article Coconut oil: beyond the hype; just to summarise this long and fully-referenced article, coconut oil:

Again, read my previous article if you want more detail on coconut oil.

Once again, I’ve already discussed olive oil in great detail in The Mediterranean diet: sorting fact from fantasy. The bottom line is that olive oil is not ‘heart healthy’; it’s just less damaging to cardiovascular health than saturated animal fats such as butter, which is hardly a ringing endorsement of olive oil.

And if you’ve heard that the PREDIMED (Prevención con Dieta Mediterránea) study proved that a Mediterranean diet with either olive oil or nuts is better for cardiovascular disease prevention than a low-fat diet, you’ve been suckered by one of the biggest Big Fat Myths of our time.

You see, the people assigned to the ‘low fat’ diet in the PREDIMED study didn’t eat a low fat diet at all. 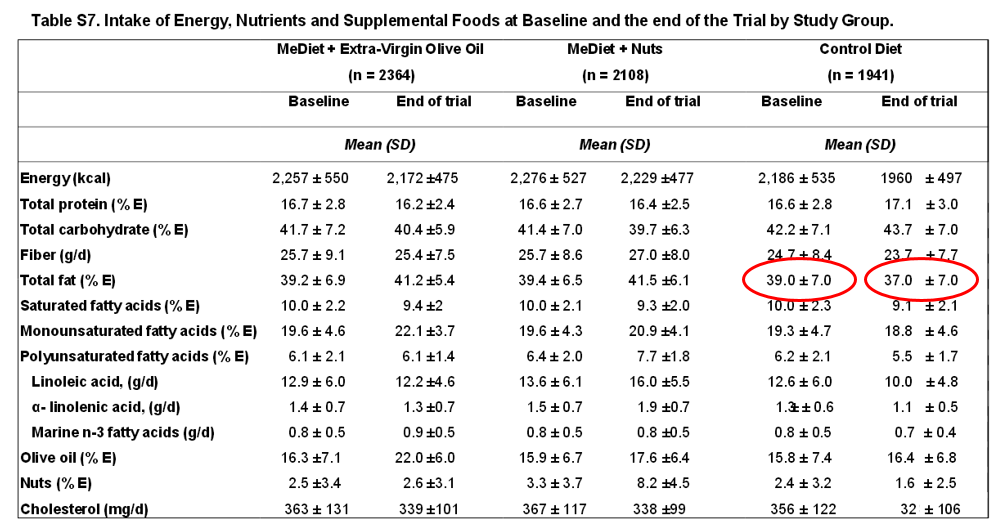 So what the PREDIMED study actually proved is that a pretty bad diet supplemented with olive oil or nuts, is a bit better for you than a truly god-awful diet. How much better? Well, eating a Mediterranean diet plus olive oil would lower your risk of the primary end point (a composite measure of heart attack, stroke, and death from cardiovascular causes) by 0.6% compared to eating the ‘low fat diet’ that was anything but low fat, and eating a Mediterranean diet plus nuts would lower your risk by 1%.

Excuse me for not being blown away by these outcomes, especially when I compare them to the amazing results that Drs Dean Ornish and Caldwell Esselstyn have obtained, using a low fat plant-based diet to reverse heart disease!

Every time someone trots out this particular myth, I get an almost uncontrollable urge to scream at them, ‘Stop taking advice from people who earned their nutrition degree from the Academy of Google!’

As anyone who has actually taken a nutrition course knows, there are only 2 essential fatty acids (building blocks of fat that you have to eat, pre-formed, in your diet because you can’t make them yourself). They are the 2 polyunsaturated fatty acids

That’s it. Every other type of fat that we need, we can make all by ourselves, out of these 2 fatty acids along with non-fat precursors, chiefly carbohydrate.

Avocado contains chiefly monounsaturated fat; in fact out of the 32 g of fat in half an average avocado (flesh only), over 19 g is made up of monounsaturated fat. The remaining fat in an avocado is chiefly saturated (more than 5 g), leaving just over 4 g of polyunsaturated fat. Out of this, most is linoleic acid (the omega 6 fat that most people get too much of anyway) and 0.255 g is alpha-linolenic acid (the essential omega 3 fat). In what universe does this constitute a food high in essential fats?

Now, don’t get me wrong, I love avocado and enjoy the rich, creamy texture that it brings to salads and Mexican foods. But I don’t fool myself that it’s making some irreplaceable contribution to my nutritional intake; it’s just a treat that I have in very limited amounts.

Oh, puh-lease. I know people love to hear good news about their bad habits, but this one is beyond ridiculous. The people pushing this myth are the same ones telling you that eating carbohydrate-rich foods such as rice, potatoes and lentils makes you fat, despite the fact that the slimmest populations of humans on the planet eat a starch-based diet.

Here are some facts about fat:

A 2015 study in which obese people were confined to a metabolic ward so that the effect of either carbohydrate or fat restriction on their weight could be precisely measured, clearly showed that it was cutting dietary fat that cut the body fat. The title of the study says it all: Calorie for Calorie, Dietary Fat Restriction Results in More Body Fat Loss than Carbohydrate Restriction in People with Obesity.

Myth #4: Fish oil is good for your heart

This is one of those myths that just won’t die, no matter how much evidence accumulates to disprove it. A major meta-analysis published in 2012 in the Archives of Internal Medicine summed up the state of play in regards to fish oil supplements:

Even more worryingly, if you’ve already had a heart attack or suffer from angina, taking fish oil or eating oily fish may actually increase your risk of sudden cardiac death, and certainly won’t prolong your life-span; while eating dark fish may increase your risk of developing atrial fibrillation, an abnormal heart rhythm that increase the risk of stroke, dementia and heart failure.

Myth #5: You need to eat a high-fat diet for hormonal health

I’ve had so many female clients tell me that another naturopath or nutritionist advised them to eat a high-fat diet to ‘balance their hormones’ that I’ve pretty much lost all faith in the institutions that educate and credential such practitioners, whose modus operandi appears to be simply Let’s Make Stuff Up.

Dr Neal Barnard of the Physician’s Committee for Responsible Medicine showed that a low-fat plant-based diet raises SHBG and reduces period pain and PMS. So if your hormones are giving you headaches, it’s time to give high-fat foods the heave-ho!