Ask most Australian adults how much milk they drink, and they’ll answer

‘I really don’t drink milk – I just have a bit on my cereal and a dash in my coffee’.

So how good an idea is all this milk guzzling? Pretty much every health claim that the dairy industry has made for their products has been debunked over the last few decades, with multiple meta-analyses showing that dairy product intake does not reduce the risk of bone fractures (and may even increase the risk), does not assist with long-term weight loss, is not responsible for the blood pressure-lowering effects of the Dietary Approaches to Stop Hypertension (DASH) Diet and in fact is associated with higher blood pressure in lactovegetarians than vegans (see here also).

Still keen on dairy? A recently published study on over 98 000 Swedish women and over 45 000 Swedish men whose dietary habits and disease risks have been tracked for up to 30 years, found that drinking more milk was associated with a higher risk of death. Chillingly, the researchers reported that

“In women, death rates were already increased at 1–2 glasses of milk per day”

which, as the dairy industry brags, is the average daily intake of milk in Australia.

The Swedish researchers speculated that the higher mortality risk they observed may be due to lactose (milk sugar). Lactose is broken down by our digestive processes into the simple sugars glucose and galactose, and galactose has been shown in animal studies to induce oxidative stress and inflammation, accelerating the aging process.

In fact, the same research team had found in a previous study that humans who drink more milk have higher levels of two markers of oxidative stress and inflammation, 8-iso-PGF2α and interleukin 6: 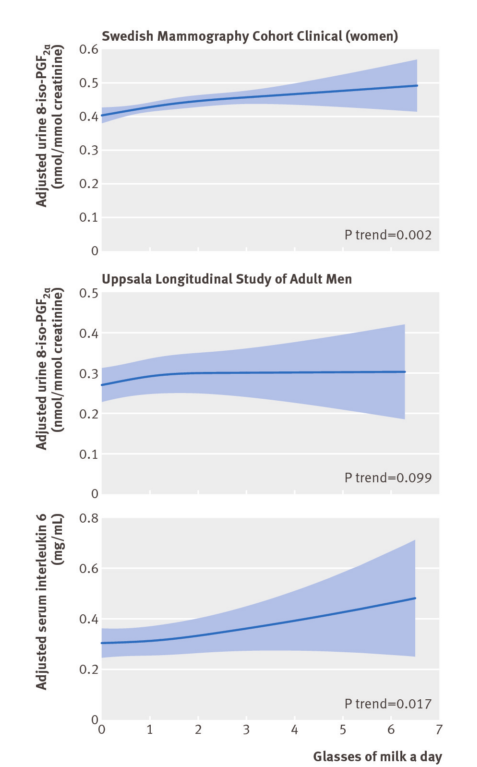 Lactose intake has also associated with an increased risk of developing pancreatic cancer, one of the most feared cancer types due to the grim fact that less than 7% of people diagnosed with it will still be alive after 5 years.

And if that’s not enough to get you to quit milk, the dairy industry is, according to Professor of Animal Sciences at Colorado State University, Bernard E. Rollin,

“one of the most ecologically harmful human activities“,

as a major cause of land degradation, deforestation, water stress, pollution, and loss of biodiversity.

Fortunately, there are many health-promoting alternatives to dairy products, including a wide variety of plant milks and yogurts. I favour whole-bean soy milk such as Bonsoy, oat milk and better brands of almond milk (the shorter the ingredient list, the healthier the product!) and home-made soy yogurt which I make from Bonsoy and a dairy-free yogurt culture. Coconut milk and coconut yogurt are far too high in saturated fat for anything other than occasional use.